When I told you about my reason for buying a knitting mill, then this was my justification: Harry Potter scarves.
For years I have been collecting wool with the intention of making Harry Potter scarves. It was mainly a search for the perfect colours according to my eyes. It actually started ridiculously many years ago when I first saw the Zeeman Tweed in my local Zeeman store. At that time they only had neutral colours, a beige (of which I used my gloves as tribute to the 11th Doctor) and a brown (which I used for the first sweater I knitted for myself), but the retro feel of that tweed wool was the first seed for my desire to knit cozy Harry Potter scarves with it.
Unfortunately, Zeeman didn’t release that many colours of that wool, or if there were less neutral colours, they weren’t suitable for what I wanted or they were sold out immediately.
I regularly searched online for a comparable tweed wool, but either I didn’t immediately find what I wanted, or it was much too expensive to buy or ship.

Fast forward to 2022 and the purchase of my knitting mill, which I justified as a medium to knit the scarves with. In the meantime I had already collected a few tweed balls in a suitable colour, but instead of starting to knit up what I had, I hoarded the pretties for someday.
Someday, because I didn’t have ALL the colours for all four houses yet.
Someday because I was busy with something else now and knitting four scarves was somewhat intimidating.

But the call to ACTION became persistent when I bought my knitting mill. Also encouraged in part by the promotion with purchase where I also received two skeins of Katia Merino Aran for free, and chose colours in a Harry Potter retro scarf theme.

I first cast on the scarf in Katia wool.
I had waited a bit longer to get started on it because I was hoping for a quick delivery of the tension fork for even tension, which I talked about earlier. But when it turned out that customs would be difficult about the delivery of my American parcel, despite the fact that everything was in order legally and financially, and the delivery was seriously delayed, I got to work anyway. And boy, was this addictive!
In no time most of the work for the first scarf was done and I immediately flew into the second scarf; and then the third; and the fourth.

So the first scarf that came off my knitting mill was this one for HUFFLEPUFF, in yellow and gray, like the retro version of Newt Scamander in the Fantastic Beasts movies.
Without the help for the tension, some mistakes have crept into this scarf, but all in all it looks so good!

Next I started working on the scarf that will be the most popular: GRYFFINDOR.
For this I did have the desired colours in Zeeman Tweed, namely a dark red and a golden yellow.

Shortly after setting it up, I finally found the ordered tension fork in my mailbox.
After a lot of back and forth with customs, they suddenly – without any counter-message or reaction to my objections to pay ridiculously high extra costs – finally released my package and had it delivered. This fork made it a lot easier to keep even tension when knitting and this scarf also rolled off my knitting mill amazingly quickly and was finished in no time.

Then came SLYTHERIN, for which I also had suitable tweed colours: silver gray and green.

And lastly, I got to work on my own house, RAVENCLAW.
For this I had searched the hardest for the perfect colours. In the movies, this house is shown in blue and gray, but in the books, it’s blue and bronze, which were the colours I wanted. I had been able to obtain the blue in tweed a while back, but the bronze was not so easy to find. Fortunately, warm autumn tones have become more and more popular in recent years, and one day I came across a very suitable colour at Wibra. Unfortunately this was not tweed and this wool was also a lot thinner than the blue tweed wool I already had, so it was quite a challenge to use these two together on the knitting mill. I had to start over a couple of times before I found the perfect way to combine the two with a good tension. The tension fork was really an indispensable tool for this! 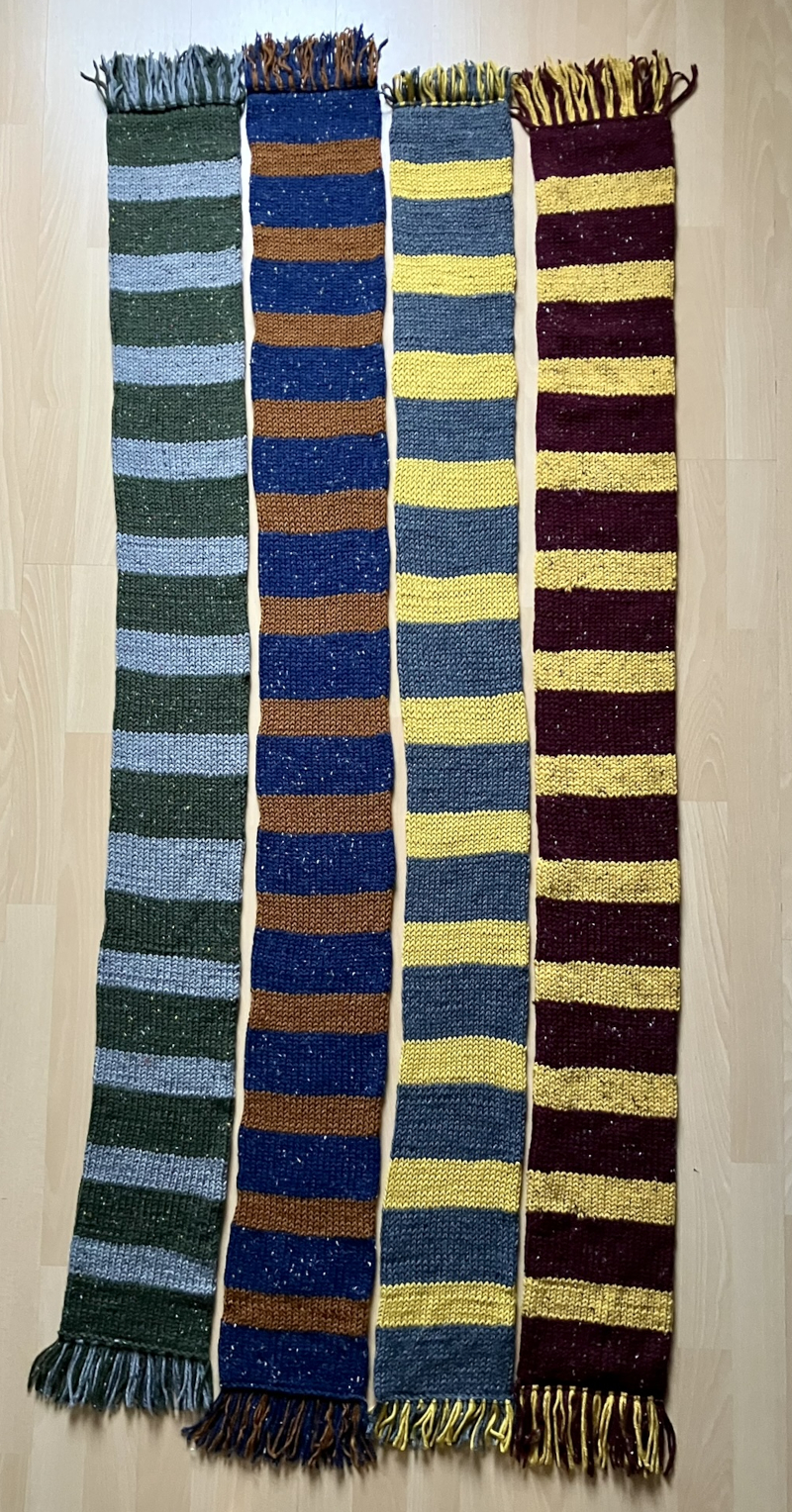 TADAA!! Then suddenly I had my four scarves!
I say suddenly, because I had knitted, knotted up the ends, crocheted the ends closed and attached frills for all four in less than a month! Amazing! 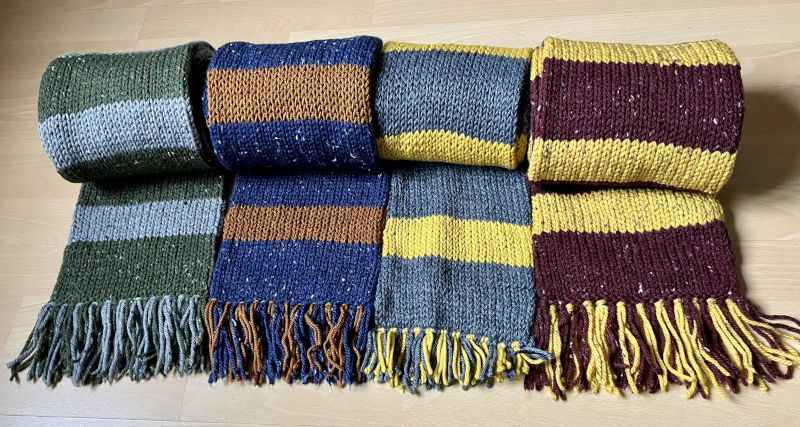 And the result, oh oh, the result is exactly as I envisioned!
The colours really work together perfectly! I thought I was really going to find it a shame and disturbing that I hadn’t managed to make all the scarves completely in a tweed wool, but that’s not the case at all. Once I saw all my scarves side by side like this, I was really happy. 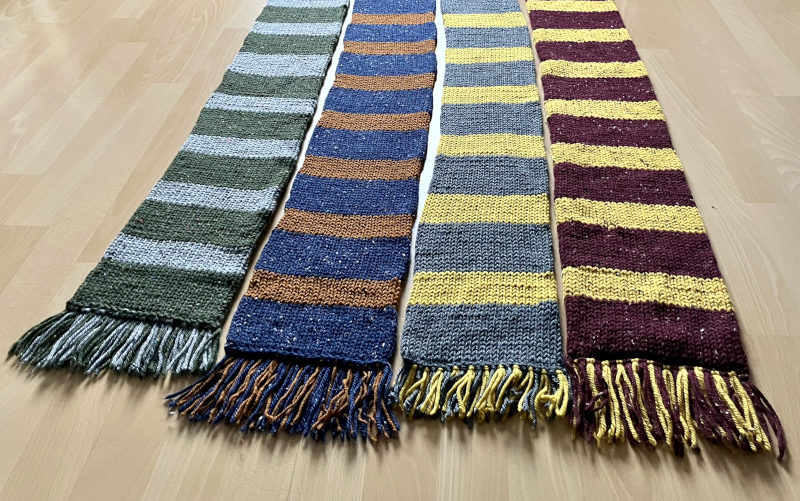 Each scarf is approximately 155cm long, without fringe, and combines between 12 and 14 stripes in the main colour with between 11 and 13 stripes in the secondary colour.

Seriously, so glad I was able to cross this one off my making bucket list! This makes up for the cost of the knitting mill for me, because I really enjoyed making it. Really addictive to see how fast you can knit round after round with it, without hand cramps, lol.