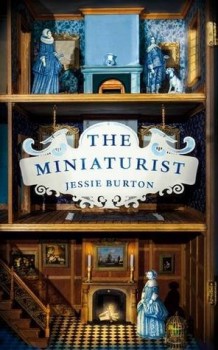 I bought The Miniaturist by Jessie Burton in February through Bookdepository. I had read about the book on Goodreads. The cover is beautiful, the synopsis intriguing and the reviews mostly positive. So when I felt like buying books from my favourite online bookshop again, I didn’t hesitate too long to add it to my cart.

The Miniaturist is set in 17th century Amsterdam where we follow Pertonella Oortman, who after her marriage to Johannes Brandt, a successful salesman of the Dutch East India Company, moves to a house on the prestigious Herengracht. For a wedding gift her new husband gives her a beautiful miniature version of her new house. But when Petronella contacts a miniaturist to help her fill the doll house, this is the beginning of a number of bizarre events

Let me begin by saying that I blame this book for my 3-month-lasting disinterest in books. Once I had finished it, I really did not feel like reading anything. So I guess this already says a lot about my opinion on the book: a true disappointment.

First, I really had to force myself to finish the book. The story had a really slow start and just goes on and on. It took me 1 month to go through it, which is a lot for my standards.
Secondly, I had no affinity what so ever for any of the characters. They endured tragedies and become disillusioned, but I honestly couldn’t care less. Their actions and emotions seemed unbelievable and often completely incomprehensible.

Eventually I really wanted to finish the book, even if it was a struggle. Why? Because I wanted to know what the freaking deal was with the mysterious miniaturist.
Very (veeeeeeeeeeeeery) slowly the mystery around this character is built. Every time you think you’ll get to the bottom of the mystery, you are led back to unrelated events or boring conversations. And then, suddenly, the book is over. Certain events are led to an – again, unbelievable – crescendo, but the how and what of the miniaturist is never explained. It all remains very vague and unclear.
When I finished the last page, I honestly believed my book was missing a chapter or two. In my confusion I even reread the cryptic first chapter, hoping I had missed something crucial there. But no, the book truly does end without explaining its title character.

Yes, I know, I may now have spoiled the book for many of you and for that I could apologize, but I won’t.
Seriously though, when a book is titled “The Miniaturist”, one can expect the character to be an important one, which will eventually receive a background and a motif. But when it turns ou that it is just a type of Deus ex Machina, a desperate attempt to give a weak story some mystery, without any depth or relevance in the end, then one is allowed to be disappointed and decide to give away this plot element. This way I sincerely hope that I can save some of you the disappointment and the following lethargy for books I went through after reading The Miniaturist.