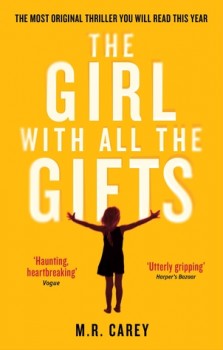 For 3 months I’ve been suffering from a reading-block. Not a single book could entice me, but not by lack of trying from my part. I don’t think it was the books’ fault, but mostly due to my state of mind.
Eventually, I forced myself to pick a book and stick by it. Therefore I picked one that I had been looking forward to for a while now: The girl with all the gifts by M.R. Carey. And boy oh boy, did that book surprise me!

Melanie is only 10, brimming with curiosity and absolutely in love with school, especially on Miss Justineau’s days. She’s extremely intelligent, has a photographic memory and a passion for Greek mythology.
Every morning she sits in her room, waiting for the two armed soldiers to escort her to class. One of them straps her arms, legs and neck to a wheelchair, while the other keeps a gun pointed at her. She thinks they don’t like her, so she tries to break the ice by telling them she won’t bite. They are not amused.

Warning! Spoilers!
It’s very hard to review this book without giving away an important plot element. I honestly believe it is better to start this book as unknowing as possible, without expectations or prejudice. So if you are planning to read this book, I highly urge you to not read the text behind the plus-sign below!

Well, let me call a cat a cat. The girl with all the gifts is a zombie book.
If I had know this, I would probably have never even thought of picking it up. I love fantasy as much as the next person, but zombies are a bridge too far for me. Having said that, M.R. Carey’s zombies (the hungries) are, as opposed to other zombies, very believable. The how and the what of their unnatural state is explained very scientifically, which for me makes this book that much more creepy. I can really believe this could happen to us. And that is what made me finish the book, even after I realized I was reading a zombie book!

Honesty does compel me to admit that the scientific part that I loved, was also the reason I wanted to put the book down. The unavoidable bloody scenes are not absent from this a-typical zombie book, and the scientific and thus very descriptive approach of these scenes often left me nauseated. But hey, it is part of the genre and you could easily skip these parts without missing out on the story.

The characters also gave me this dubious feeling. On the one hand they are very cliché (the overbearing mother figure, the harsh soldier, the mad scientist), but on the other hand they are also very realistic and humane. More than once I caught myself being irritated by their stereotypic behaviour, to then be indignant when they did or said something unfitting for their stereotype.
I felt for them, cursed them, encouraged them and – even if I could not condone some of their actions – understood them; each and every one of them even if they assumed the role of adversary.

In short, for me the girl with all the gifts by M.R. Carey is a unique, original, unexpected, inventive, moving and heartbreaking book that – after the final scene – left me blank and slightly scared, as if it really was a vision of things to come.
An absolute must-read for those with an open mind.