Even before I bought the knitting-mill, I had again caught the knitting bug.
It all started with the blankets I made earlier in the year and the fact that a number of seamstresses I follow on YouTube suddenly started knitting. This reminded me that I still had so many cute sweater patterns that I wanted to make for myself one day and my hands immediately started to itch again. Seeing someone knit, makes me knit, apparently. 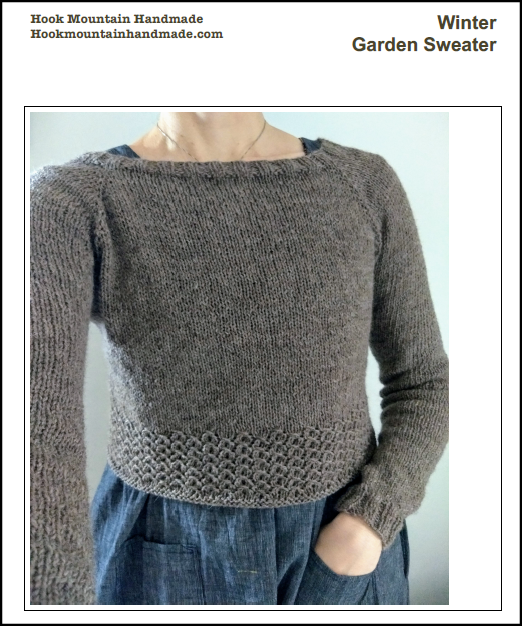 For my first I-want-to-ease-back-into-knitting-garments project, I chose a free pattern I had saved on Ravelry a while ago: Winter Garden Sweater from Hook Mountain Handmade.

I really like the neckline in this sweater and also the subtle lace at the bottom of the sweater.
However, it would be weird for me if I didn’t also wanted to deviate from the pattern too. For example, I also wanted to incorporate that lace in the sleeves and I was not completely convinced that I wanted the sweater so short. On the one hand, a cropped sweater is nice to wear over a dress or skirt, but it’s a less flattering look for me on regular pants. However, this is something I could decide while knitting, by regularly trying it on.

My attic is briming with yarn, so I picked something from my stash for this sweater: a wine red sports weight yarn from Zeeman. I originally bought this to make a dress for one of my nieces, but it ended up in the forgotten box instead.

After knitting and washing a gauge swatch, which gave the perfect dimensions in number of stitches and rows, I could get started.
The sweater is completely seamless and to my surprise the collar was also knitted right away, without being picked-up afterwards. In retrospect, this makes a lot of sense, since a boat neck doesn’t have the tight requirements of any other neckline type.

For the first time in a long time I also knitted on the train. With an audio book or some good music in my ears, the commute is over in no time!
Also whilst watching tv I abandoned my genre blanket for a while, in favor of knitting. It really surprised me how much my hands itched to knit this sweater. I was apparently very impatient to see the result!

When, according to the pattern, I had reached the length where I had to start the lace, it was time to try it on and decide whether I was going to follow the pattern or knit the sweater a little longer. In the end I opted for some extra length.
The lace also knitted super smoothly and then it was suddenly time for the sleeves.

The first sleeve knitted quite quickly, probably because I wanted to get to the place where I had to implement my different idea than the original pattern, namely the lace on the wrist. Not that it was a lot to figure out, since I just had to make sure to decrease to a multiple of stitches needed to knit the lace all the way around. But again, I was rather impatient to see how this would look in the whole.

And then I had made all the decisions I had to make and it was just a matter of doing exactly the same for sleeve 2. And that’s where things went wrong for a while, in the sense that I didn’t pick up the sweater for days. A pretty common phenomenon with me. I think I’ve probably done this with every sweater I ever knitted for myself. I always seem to abandon the project, with only a sleeve or a little more left to go.

In the end I had to set myself a deadline so I would actually finish it.
I really wanted to take the sweater to London, so it had to be finished at least 2 days before departure, so that I could still wash and block it.
And that was ultimately the motivation I needed to finish it and I am so happy with the result!

I’m super happy that I knitted it a little longer than the pattern suggests and also so happy that I worked in some lace in the sleeves!
If I could change anything, I would perhaps trade in a bit more of the regular stockinette stitch for the lace, so that the proportion was a little more like the pattern.

In the end I didn’t wear the sweater in London because it was way too hot there, lol. But I’ve worn him on several occasions since!
This sweater also made me want to knit more for myself again. I still have so many cute patterns and way too much wool in the attic, so even though I don’t like the intentions-engraved-in-stone, I still hope to knit at least 2 sweaters for myself in 2023!