As the title says, I bought a knitting mill. Somewhere at the beginning of November already, and I’ve played with it quite a bit since then, so it’s high time to show it here too!

First and foremost, what is a knitting mill?
Ewel, you undoubtedly know a knitting nancy? That is a wooden doll or mushroom with around 4 pegs on which you can crochet/knit a long 3D i-cord. Well, simply put, a knitting mill is an enlarged version of that, but with a handle that does most of the work for you.

I didn’t really know of their existence until sometime in October. I knew knitting machines existed, but had never heard of a knitting mill.
Now, I follow a number of creative makers on YouTube and one of them published a video for a vintage sweater that she knitted on her knitting machine. That video made me knitting machines some more, just the basics of how they worked and what they cost, because it looked like fun. Anyway, I quickly put that research away when I saw what the price of such a machine was. Didn’t immediately seem like a purchase I wanted to make, lol.
But you know how it is with looking something up on the internet, don’t you, then suddenly you get commercials and all sorts of suggested videos/posts that you might also like. And so I learned about the existence of knitting mills.

At first it seemed they were mainly used to knit hats, but diving a little deeper gave me ideas that this could be used for much more, such as scarves for example. And then I immediately thought of the big pile of wool that I’ve been hoarding in the attic for years now for those Harry Potter scarves I was going to knit, but never get around to. Now the idea got stuck in my head that a knitting mill would probably make that idea a lot less intimidating to start.

And yes, a good week later I got this delivered to my house 😀
My choice fell on an Addi Express Kingsize, a machine with 46 needles, one of the larger models. I made my purchase at Hobbygigant (not sponsored).

Assembling the machine and mounting it on the table was a piece of cake. And after a quick read through of the included booklet, I decided that the best way to learn was to just do it.

I started with some balls of left over yarn, but those turned out to be much too small, as I finished them up in no time. It did give me the chance to already learn how to cast on and change colours, both of which turned out to be quite straightforward and easy. 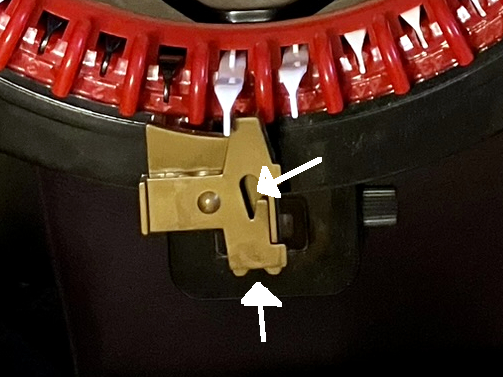 The only thing I found difficult was keeping the tension even for an even result.
The machine has a yarn feeder with which you can slide the wool into the machine in two ways: either through the hole at the top where there is no tension, or through the hole at the bottom, which is slightly smaller. Of course, the amount of tension this smaller hole gives depends on the thickness of your yarn: the thicker, the tighter. That is why it is also important that you somewhat guide the wool with your hand and that’s where the skill is needed to ensure this is constant throughout your project. So that will take some practice!
And it will also take some experimenting to determine which thickness of wool would give the best result.

What was also clear was that this could become addictive!

To really get a feel for my new toy, I decided to make a hat. This is what most people make on a knitting mill, so I thought it would be a good place to start.
For the yarn I took a few of the way-too-many balls of Zeeman Royal from the attic and knitted about 100 rows in about half an hour, enough for a child’s hat!
When casting off however, I lost a few stitches without me noticing, but in the end I was able to sew everything reasonably tight on the inside, without this being visible on the outside. 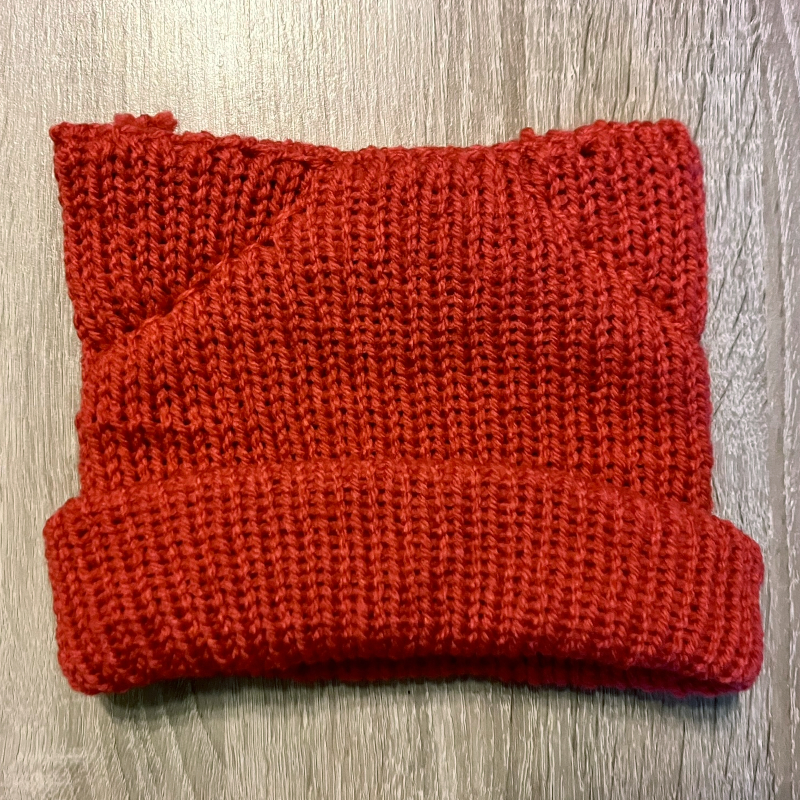 For my next try, I made the exact same tube of a 100 rounds, but held the wool a little tighter in my hand as I slid it through the feeder. This meant that the end result was smaller than the first hat, despite the same number of rows.
Instead of a regular hat, I sewed some cat ears into this one, but did it in a distracted and careless mood, because I confused the inside and outside!

If I put the two hats next to each other, I find the one with the tighter tension (ears) more beautiful and even. This is the one where I guided the yarn quite tightly through my hands before feeding it into the machine. However, I knew that this way of working would not be sustainable, since I already had friction marks on my hands from just making this hat!

While searching for possible solutions to my tension problem, I came across Savlabot at Etsy, where a tension fork is sold. While reading up on it, I found nothing but positive reviews about this and it turned out that many people already use this tool as a kind of standard accessory. Still, I hesitated on ordering, since it turned out to be quite expensive with the shipping costs, so I parked that idea for a while. 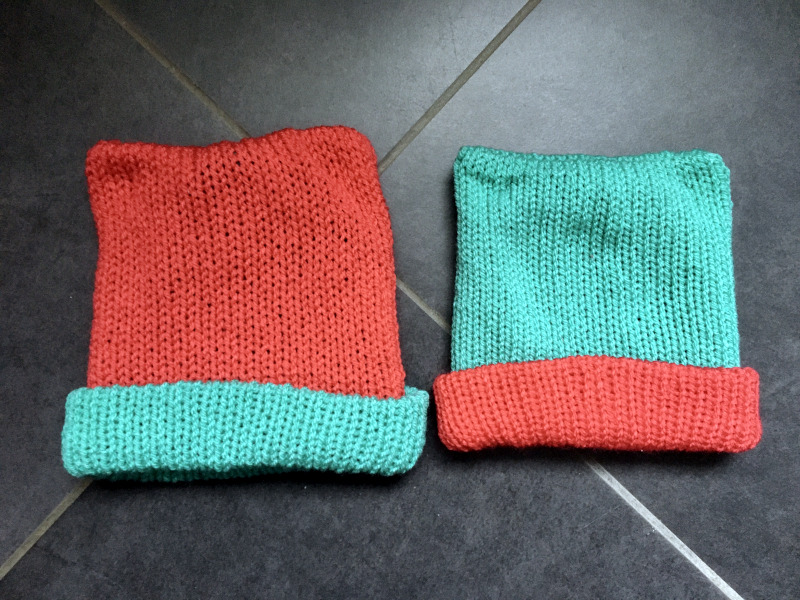 At Savlabot I also came across a nice pattern for a fox hat, so I wanted to make this too, despite my unsolved tension problem. I decided to make an experiment out of it. I made two identical hats, but for one I only used the smallest hole in the yarn feeder and for the other I also kept tension with my hand. Crazy how much difference in size that made! For example, for the largest hat I used 60g wool, while the smallest used 50g.
However, this did confirmed to me that my preference was for the tighter result, both in terms of look and feel, so in the end I decided to make the investment for the tension fork, since I hadn’t found any any similar alternative in the meantime.

As an experiment, I also wanted to make a third fox hat, using the top hole in the yarn feeder of the machine, but this didn’t go so well.
Suddenly I noticed that there were pins without stitches and pins with more than 1 loop, meaning that stitches had fallen off somewhere and/or had been double knitted. Online I found plenty of videos explaining how to solve this, but in the end I didn’t want to bother with fixing this entire project, as it was already clear that the tension was way too loose for this wool and the result was not that good looking.
After practicing a few of the repairs, I unravelled the whole thing. 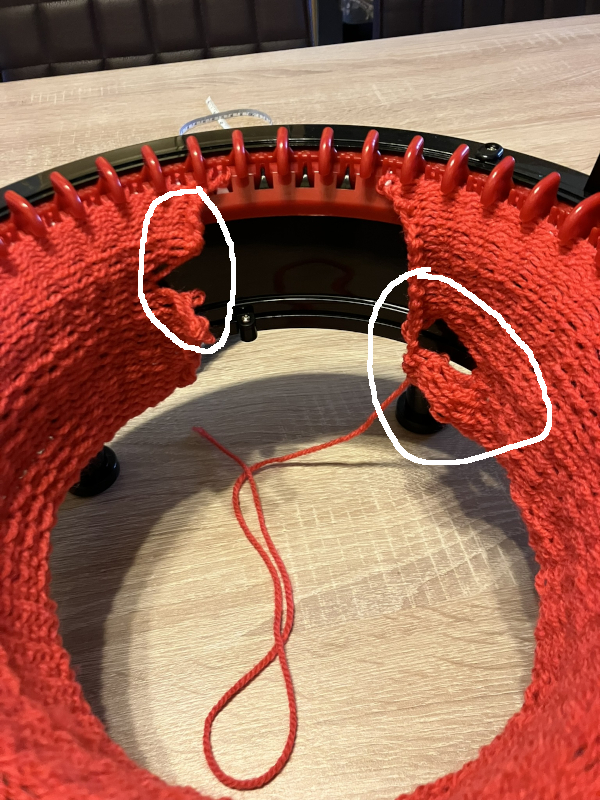 The next thing I wanted to practice was knitting flat panels instead of tubes, which is also possible with this machine.
But here my first few attempts ended in chaos. It is very easy to lose stitches at the beginning or the end, so care must be taken to ensure that the stitch descends correctly. This will therefore require some practice, but I had to stop my training in the knitting mill for a while, since at that moment I left for London. Somehow that actually worked out well, since I was still waiting for my tension fork to arrive to start any real projects.
But more on this later!

Any readers here who own a knitting mill? What are your experiences?