Hey, hi, hello!
It’s been a while again since I took the time to write a post. Lately, I had been doing so well with blogging regularly, especially for the standard monthly posts about all my bookish stuff. But then I let myself slack off for a couple of days, which turned into a couple of weeks and before I knew it another month has passed! In the meantime, it has also been a month since I was on holiday in Crete!

I had known for a while that I would take a last-minute vacation in September, but the actual destination would depend on pricing and flight possibilities. On September 1st the verdict came back to CRETE!

I was extremely excited about this, because I had never been to Greece before and had always wanted to, since I’m so obsessed with Greek mythology.
Yes, yes, I know modern Greece has nothing at all to do anymore with the old myths, but the landmarks mentioned in the ancient stories do still exist and the country is still littered with art and reminders of them. Crete alone appears in so many of those stories, the most famous of course being that of the Minotaur!
So yeah, super excited! 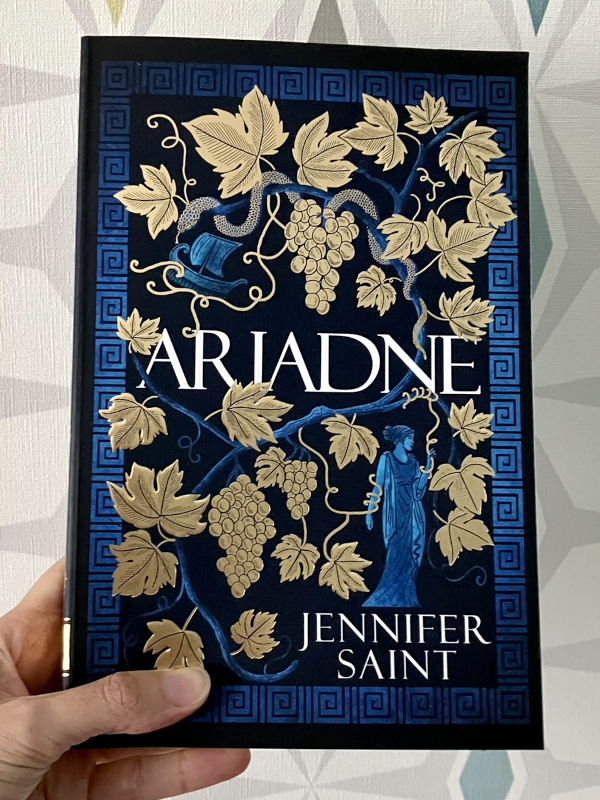 To prepare for this vacation I of course did all the usual stuff one does, but I also decided to finally read Ariadne by Jennifer Saint. This book had been on my TBR ever since I heard about it, but I never prioritized it. And even though it didn’t fit on my Bookoplathon TBR, I thought now was the ideal time to read it.
You will read about my thoughts on this book later, but I can already reveal that I gave it four stars, so I definitely recommend!

We had amazing weather on Crete! Sometimes even a bit too hot for me, because I suffered a minor heat stroke while visiting Heraklion, which forced us to spend the rest of the afternoon on a terrace.

First of all, of course, there was Knossos where the palace of King Minos was supposedly located, and under which was the labyrinth of the Minotaur.

The site itself is fun to visit, because it gives you a good sense of how extensive it must have been at the time. Spectacular to think that such an ancient civilization already had such architectural masterpieces up its sleeve. (“2000 years BEFORE christ?!” as an American lady exclaimed in surprise)

We visited the site on a Sunday afternoon and had the place almost to ourselves!
Earlier we read that it was very busy and that you had to be well equipped against the heat, since you could wait in the sun for a long time, which I was a bit afraid of, given my previous experience in Heraklion. But Sunday afternoon was a very good plan, because we could visit everything without having to wait and could even take pictures without other people on it!
We also paid for a guide, which I would recommend, because otherwise it is very difficult to know where you are walking, since the number of signs along the way is really minimal.

We also visited the archaeological museum in Heraklion, where many of the excavated treasures are located. Among other things, this beautiful chalice for drink offerings in the shape of a bull’s head and this vase on which – as is assumed – Ariadne and Theseus are depicted.

We also visited the site of Gortys.
This one is a lot smaller than Knossos and although there was still quite a bit to see, there are virtually no indications as to what you are looking at. Only the Titus Basilica is pointed out by a sign; and we were able to deduce that there is an amphitheatre by ourselves, but everything else was unknown. That was a bit unfortunate in my opinion.

By the way, in mythology, Gortys is the place where Europa on the back of a bull – a disguised Zeus – landed on Crete and was subsequently raped, resulting in three sons – including King Minos.

The last site we visited was that of Phaistos, which is at least as impressive as Knossos, if not more so thanks to the beautiful views. This site is best known as the location where the Phaistos disk was found, which also can be viewed in the archaeological museum in Heraklion.
Here there were a few more signs with explanations, but the biggest help in navigating around was that we had previously visited Knossos and could overlay what we learned there on the constructions here.

Mythologically speaking, the palace of Phaistos was that of King Rhadamanthys, one of the brothers of King Minos, who later – like his brother – became a judge in Hades.

In addition to cultural visits, we also went for walks.
Our most extensive trip was this one to the gorge of Samaria.
Here we did the full descent from the stairs in Xyloskalo to the harbor of Hora Sfakion. A walk of approximately 16 kilometres, but with serious downhill gradients to some 1220m over stone strewn terrain.
And how my knees and thighs felt it! I had thought it was going to be okay, since we are pretty used to walking, but dear me! Especially the next day and the two days after that we still felt it. My knees recovered quickly (luckily, I had my braces on during the walk), but I don’t think I’ve ever felt so stiff in my thighs in my life, lol. I’m clearly not three times seven anymore.
Unfortunately, because of this, we decided to give up our plans to visit a cave and take it easy instead. But that doesn’t me we regret walking this gorge, absolutely not! It was really spectacularly beautiful!

And behold, there were plenty of other, less physically taxing things to enjoy as well 😉