They say that you can look back at the previous year until the end of January. If that’s the case, I’m totally going to ignore that rule, since I’m a little behind with my overviews of 2017. I still have at least 4 posts under way, but that’s not the reason for this post. In this post, I want to show what became my last handmade item of 2017.

Since a couple of years we give Christmas gifts based on a lottery system. The name I pulled out of the hat was one of my niece’s who loves dolls. So I immediately knew what I was going to give her: a handmade doll.

I apologise in advance for the bad photos. I couldn’t find anywhere in the house with decent lighting, so I had to resort to crafting with white paper and Photoshop. I’m not really happy with the result, but that’s all I have to show. The fact that I actually don’t know the first thing about photography didn’t really help here either. 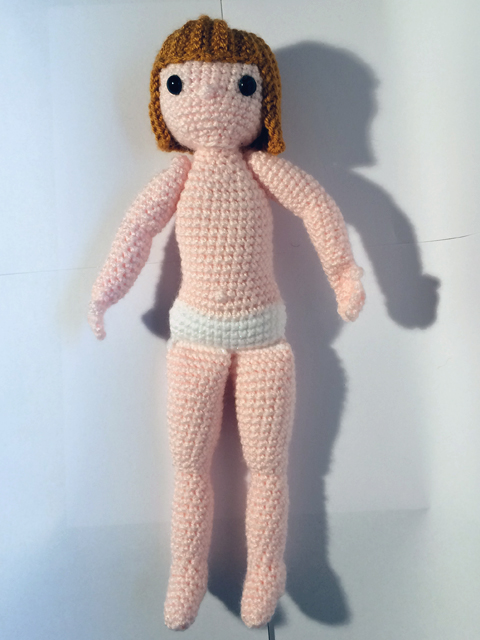 The pattern for the doll I already had perfected when I made some of my previous dolls, so crocheting the doll went fairly quick. It were her outfits that required most of the testing and planning.
Actually, the hair for this doll was a new experiment as well, based on a picture I found on Pinterest. I really like this, especially since it kind of resembles the hair of the intended recipient.

The first outfit I made was an elf-costume.
After some contemplation, I decided to attach her wings to the dress and not to the doll, so that the doll remained versatile.
Inspiration for the dress was found in flowers, while inspiration for the wings came from butterflies. The whole outfit mixed together with a glittery silver thread, made it look even more fantastical.

I love how this turned out. So cute and magical!

For the second outfit, I found inspiration with Lego Elves. I chose to imitate Azari, because she’s pink. No further reasons are needed 😉

The bodice was crocheted in two colours to replicate the two-toned dress. The skirt was given a flammey look by combining different size stitches. And finally, the doll received two additional pairs of shoes, just like Azari: comfi, but firm boots and airy, cute sandals.

The third and final outfit transformed the doll into a mermaid, with a beautiful light blue tail with golden accents throughout.

I could have kept on crocheting to create a fourth, fifth, sixth outfit, since I still have plenty of ideas, but I ran out of time. And a handmade doll with three outfits already made a very nice Christmas present, no?
The recipient loved it, by the way. She was so excited to change her dolls clothes that she nearly decapitated her! Happy niece = happy auntie!