Thank you everyone who voted on the nose-poll and gave their opinion!
The poll results were pretty close. Almost a 50/50 vote! But, I have now managed to make a decision for Kitty’s nose!
But before the big reveal, a little background 😉

Kitty was made for my godmother.
She asked me to make her another amigurumi – I had given her an elephant before. She specified she wanted a red-haired cat, but not an amineko.
This gave me the perfect opportunity to try out a pattern I’ve been wanting to make for a while, but never got around to: Dawn Toussaint’s Kitty Noir. 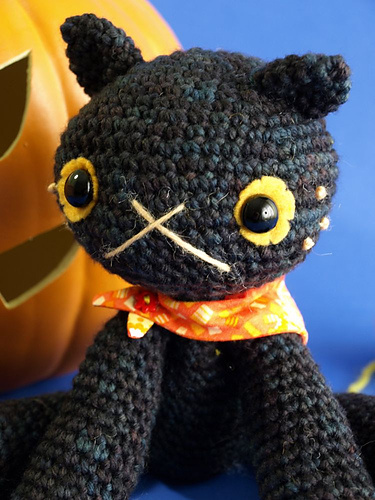 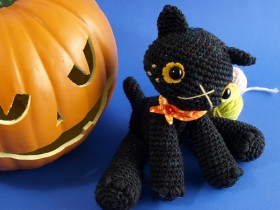 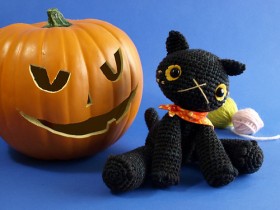 I started with the legs and arms, giving my kitty white socks and orange-striped limbs, like so many red-haired cats have (like my lost cat had 🙁 ).
The ears were left plain orange, but the tail is also striped. 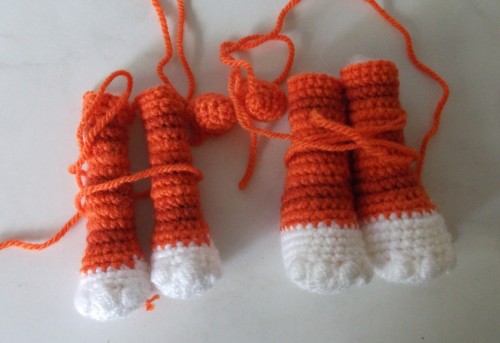 And then came the hard part: the head and body.
When I say the hard part, I don’t mean the crocheting. This amigurumi is crocheted just like most amigurumi using only the single crochet stitch.
No, the hard part is that this plushie is assembled on the go, meaning the arms, legs and tail get crocheted into place. In the end, the only sewing you have to do is the attachment of the ears.

This is something I hadn’t done before, and it is a bit of a fumble, but no more then the fumble when sewing the amigurumi together. I only feel that when assembling on the go leaves you with less control over the end-look, and it must be said that the instructions weren’t completely clear either.
If I had followed the instructions as written, my kitty’s arms would be on the back and belly, likewise for the legs, and its tail would be were the arms were supposed to be.
This wasn’t really a mistake in the pattern, just something that was stated in the wrong order.

When you have crocheted 19 rows of your head, the pattern states it is now time to attach the eyes where you want them to be.
So this is what I did, I laid the pattern aside – I didn’t read any further – and cut my felt and positioned my eyes.
After that you have to continue crocheting on the same piece to make the body. Then, after the eyes are attached, the pattern mentions you should now be at the back of the head.
This is something, I feel, should be mentioned before you actually attach the eyes. You should now that where your crochet-tail is should be the back of the head, so you can attach your eyes at the opposite end.
I had attached my eyes somewhere on the side, so I added a few extra single crochets to end up at the back of the head. This didn’t do anything weird to my amigurumi, but I just thought it was something that should be mentioned.

There are also another couple of small mistakes in the pattern, like the wrong statement of the number of stitches. Nothing major, but something that could be improved.

Anyway, I managed to assemble the kitty just fine and he’s looking very kawaii, even if I do say so myself: 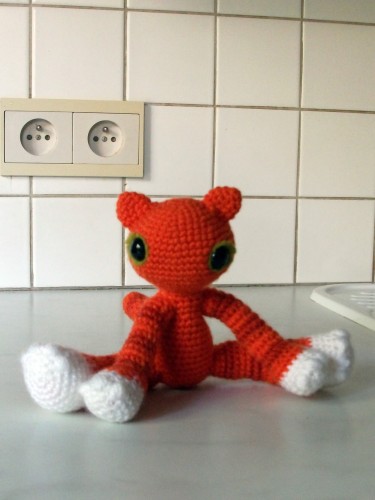 And this is where I left off in my previous post on the nose dilemma. 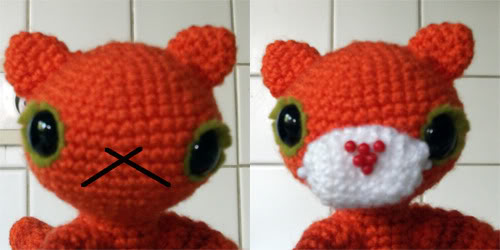 As I mentioned, the vote was pretty close, with a slight advantage for the left option. Some people also expressed that they disliked both options.
So yeah, the vote didn’t exactly swing my preference either, so I just went with my own gut: I placed the above picture picture on my laptops desktop, so I would see it everytime I started up my computer. I also had the real kitty standing close by, one day without the white nose, the other day with it pinned on. And that made it clear for me: My eyes were always drawn to the white-nosed kitty, so this is what I chose. 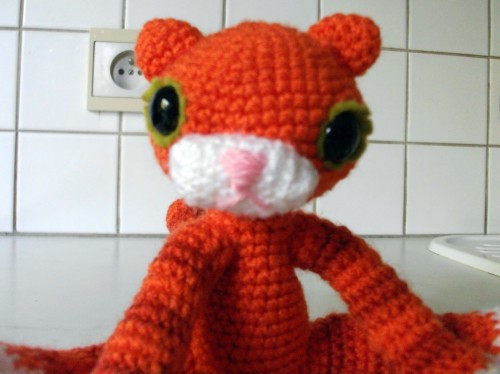 Before sewing on the white muzzle, I embroidered a real pink nose and a small mouth. And I must say, even though a lot of people did not like this nose, I am actually really happy and pleased with it. I’m in love with my Kitty Orange and if you don’t like it, well then, though luck! 😛 😉 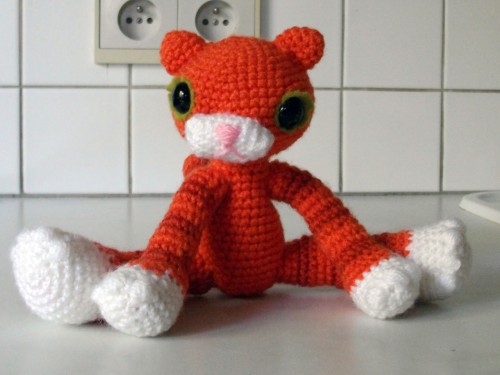 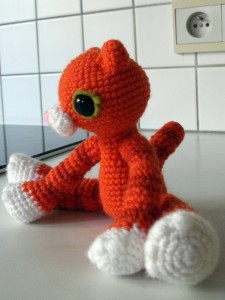 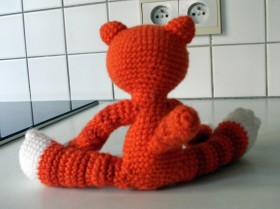