Again I let myself get tempted to start something new, even though I had planned to first finish some of my WIPs. But be honest, would you be able to resist this? 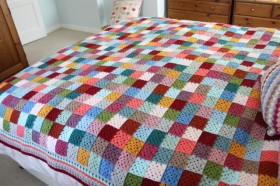 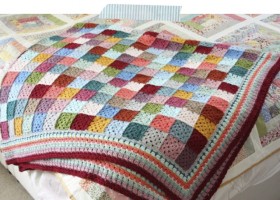 Isn’t it gorgeous? And such beautiful colours. I for one couldn’t resist and dived in my stash.

For a while now I have been looking for a project that could make a dent in my HUGE stash of Zeeman Supersoft yarn. I have two huge bags full of that yarn. I haven’t really dared counting the skeins yet, but if you know I have at least two skeins of each colour below, then you can do the math yourselves. 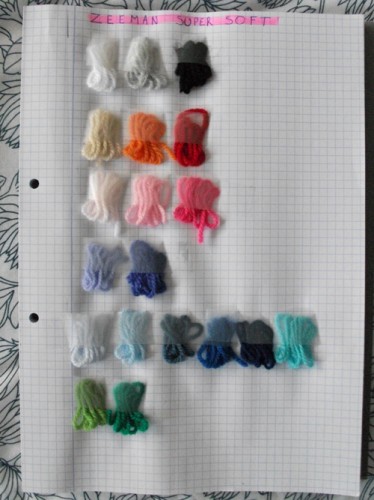 However, for the blanket that I wanted, I found the Zeeman colours inadequate. I missed something, such as yellow. So I had to find a yarn that could be used together with the Zeeman SuperSoft AND that had a good range of colours.
I asked around a bit, which yielded some suggestions, but either the yarn did not have the colours I wanted, or I couldn’t get my hands on it here (or at least not on short term : D ). Pity.

This weekend I hit the Veritas (the only shop in my town that sells brand yarns) with the small hope I’d find something useful. What I found was Schachenmayr SMC/Nomotta yarn. Across the whole store I found 2 colours of Universa and several colours of Bravo, because this one was on sale (€1 instead of €1,25).

What to do, what to do? I had already used the Bravo together with the Zeeman Supersoft in two previous projects. 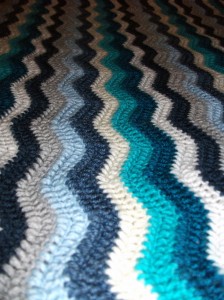 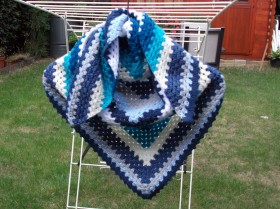 In both projects the collaboration of Zeeman and Bravo was very successful, but in the store I had fallen in love with one of the two Universa colours. Moreover, in thickness the Universa resembles the Supersoft more.
Serious dilemma. I probably pondered in front of the small wall of yarn for 15 minutes. Grab a skein, put it back, grab another skein, put it back, …

Eventually I made my decision: I bought the Universa colour I loved (I would regret it later anyway), together with 4 colours of Bravo.

At home I displayed all chosen colours (Zeeman and other) for the Patchwork blanket and approved. 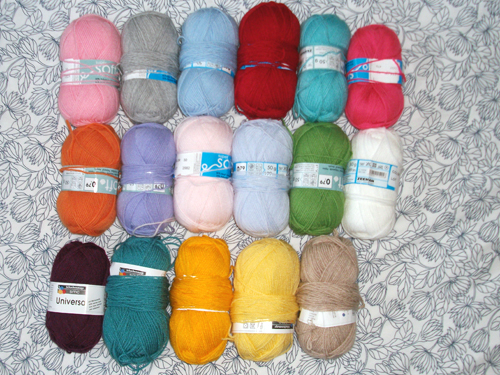 The bottom row shows the Universa and 4 Bravo’s

And then to work!
First I wanted to know how big I would make the quilt. I want a second TV blanket, so I would use my current TV blanket as a guidance.
My current TV blanket is still perfectly fine, but a second can never hurt 😉 . My TV blanket has one of those pockets at the bottom to put your feet in. GENIUS! I love the idea of the pocket and will try to recreate it with this blanket. This means I should make the blanket approximately 119cm wide and 128cm high, plus another 33cm for the pocket. In total, the blanket should be approximately 119x161cm. When it’s finished, I would sew over approcimately 33cm for the pocket.

Secondly, which crochet hook would I use and what size squares does that yield?
I always use a 3,5mm hook for the Zeeman Supersoft, so I don’t think I should deviate from that. I made a little test square of 4 rounds, which has an aproximate size of 7cm².

With the above details I could figure out that I would need a blanket of 17 squares wide and 23 high, totalling on 391 squares!
Phewie, this should be fun 😉

But today I received a visit of The Big Hesitation.
Everything went great with my first 3 squares in Universa and Zeeman, but square 4 was made from Bravo. Was it me or was the Bravo square considerably larger? Hmm, let’s try adding another Zeeman square.

Yes, the Bravo-square was bigger than the others.
Shit! What now??? My plan completely ruined 🙁

Okay, calm down, try again. What if I continued using the 3.5mm hook on the Bravo, but used a 4mm with all the other yarn. Would it make a difference???

Alright, alright, it already looks better. Or doesn’t it? Now the Universa seems a bit small, don’t you think? Argh, I don’t know!!

What should I do? Continue as I am now? Or do I scratch the project and by consequence expand my stash instead of reduced it 😆 ?
What do you think?